Time to leave and go “Home”

Last time you heard from us we where in Annapolis, we stayed there for over a week, combining lazy days with boat work. 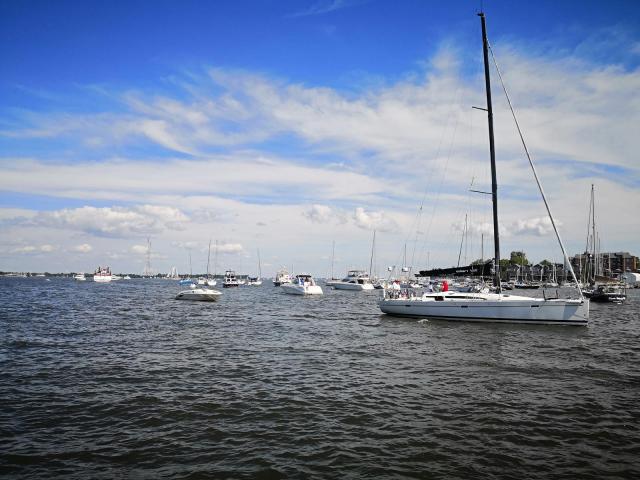 It was rather busy days in Annapolis 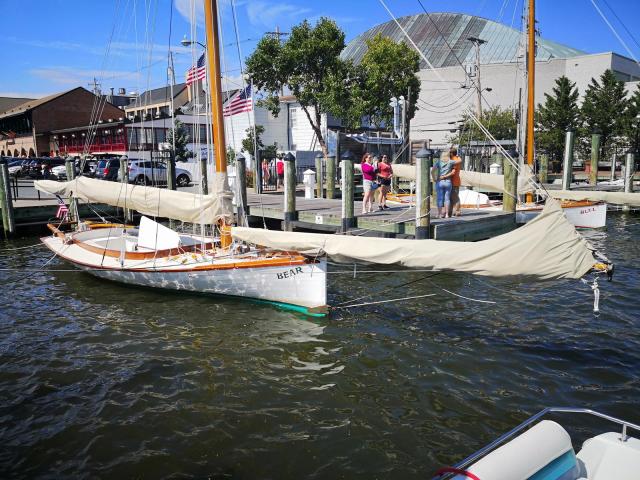 Where we saw this replica of a Sandbagger, originally, they were built for oyster harvesting around New York, people were betting on which were the fastest and the Sanbagger become one of the first racing classes. The rule was no limits on sail and they had enormous sails up to 150 sqm that was counterweighted by people and sand bags. It started around 1850.

The weather was very “good” but way too hot and humid for us. 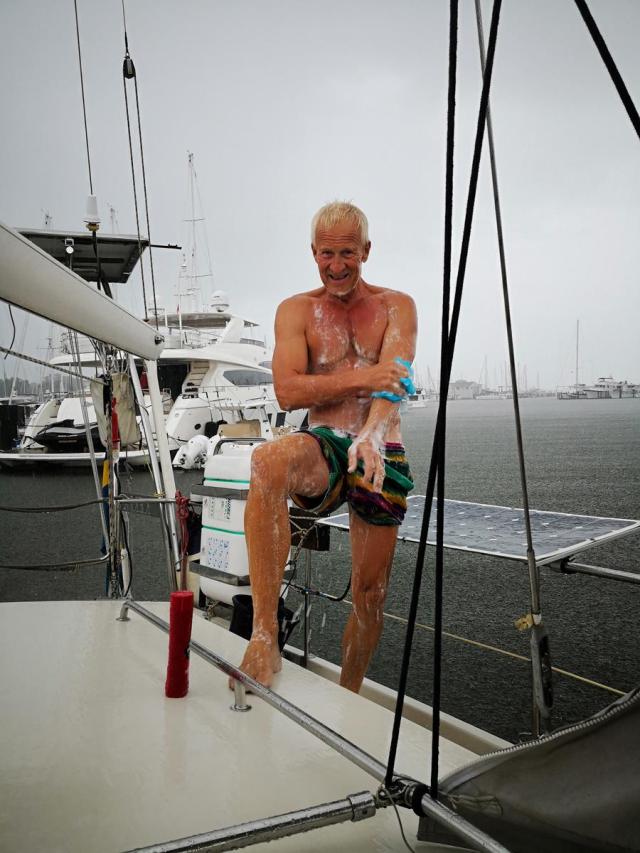 One day we got a lot of rain, and the captain took the opportunity to take a shower in the heavy rain to cool down.

We will go back to Europe for roughly 6 weeks mainly to attend our oldest daughter’s wedding, something we really look forward to, she is getting married on Samos Greece.

We will leave Kerpa in Georgetown Yacht Basin where we got a slip for free as they were so delayed when repairing Kerpa, Now the last days we have enjoyed AC and the AC units has been on 24/7 in 4 days we have used them more than the rest of the time we have had Kerpa, we might have been Americanized?

But it is a must, temperature well over 35 degree C and close to 100% humidity and a lot of work to do.

Regular service of all engines.

Running fresh water through the out board engine, Kerstin stands..

Right in the way of the cooling water out let, she got very wet but still a happy smile 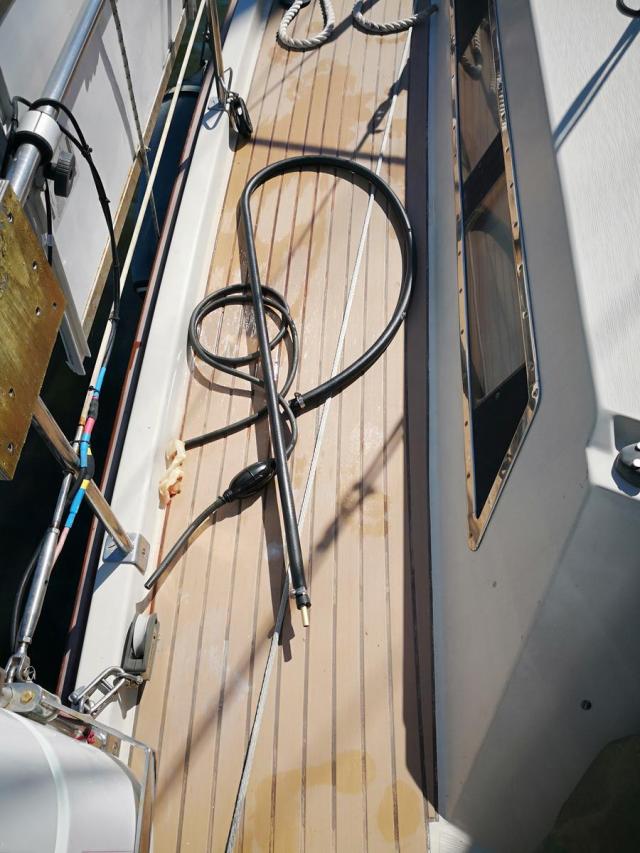 A fuel hose in which I put an aluminium tube to make it stiff so that I could positioned at the lowest part of the tank and where I found the most debris. The pump it self is just an old out board fuel hose with a hand pump. 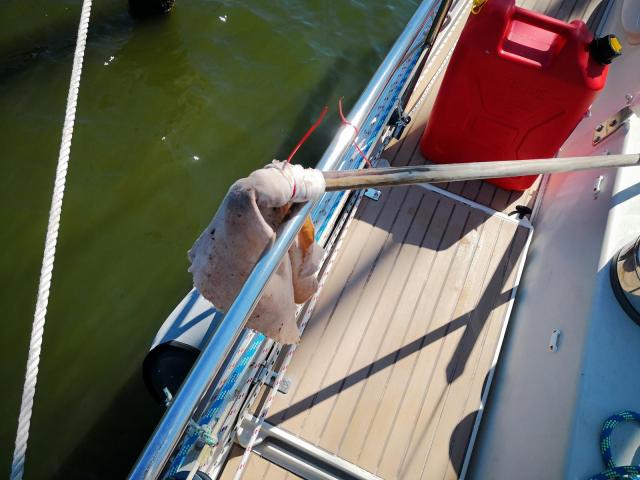 When tank was empty I just made a “broom” by attaching a rag with a cable tie and mocked around the tank. Worked well. 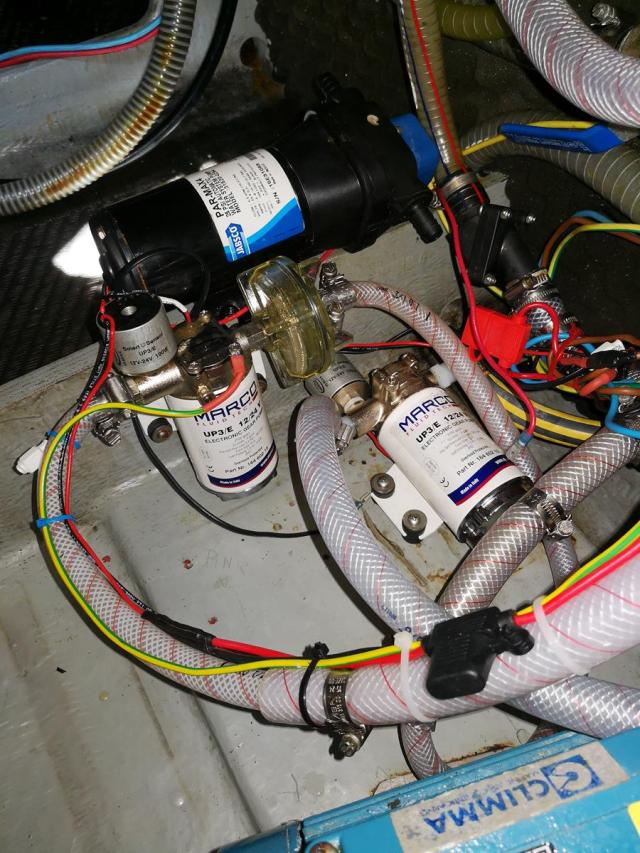 Installed a new fresh water pump from Marco, look how small it is compared with the old Jabsco pump. It does not need any accumulator tank as the pump has variable speed and gradually increase the pressure. So not only small, we saw space on accumulator tank as well, cost a little bit more but, my 1,5-year-old accumulator tank from Johnson pump was broken so in the end it will be cheaper.

More engine room work. I had notice that the water pump started now and then so obviously we had a leak somewhere, after some tracing I found it. It was the three way valve for flushing the water maker that I changed about 2 years ago that already have started to leak, so needed to put in a new valve and was forced to move the filters as well, it become a full day of work, on top of that I had to pickle the water maker again as the leaking water has flushed away all the pickling agent. Work, Work, work phu.

When we get back we will sail with the Salty dawg rally from Hampton to Antigua. In an information mail I got from them they offered a free rigging inspection from a rigger in Annapolis, very convenient for us as we were in Annapolis so why not take the offer. Of course, they want to sell us a new standing rig as ours is close to 20 years old, we have decided to change when we get to the Amel office in Martinique, but as the trip to Antigua is close to 1600 nm it is a must to make sure there are no visible flaws on the rig such as a broken strand. The rigger did not find any problem with the rig, but he said your radar will soon fall down!!!, as one of two bars holding the radar is broken. Well we had missed that one and we were both glad and sad, glad that he found the problem, but not happy when he said the cost to fix it is probably around 1000 $.

When we earlier went down the Delaware bay we were pounding heavily in the waves, we had the current with us but + 20 knots on the nose with very steep waves. It would not been fun at all having a +10 kg radar hanging in the cable banging violently into the mast threatening to falling down any minutes. Not fun at all! if falling down onto someones head it would easily been a fatal accident. 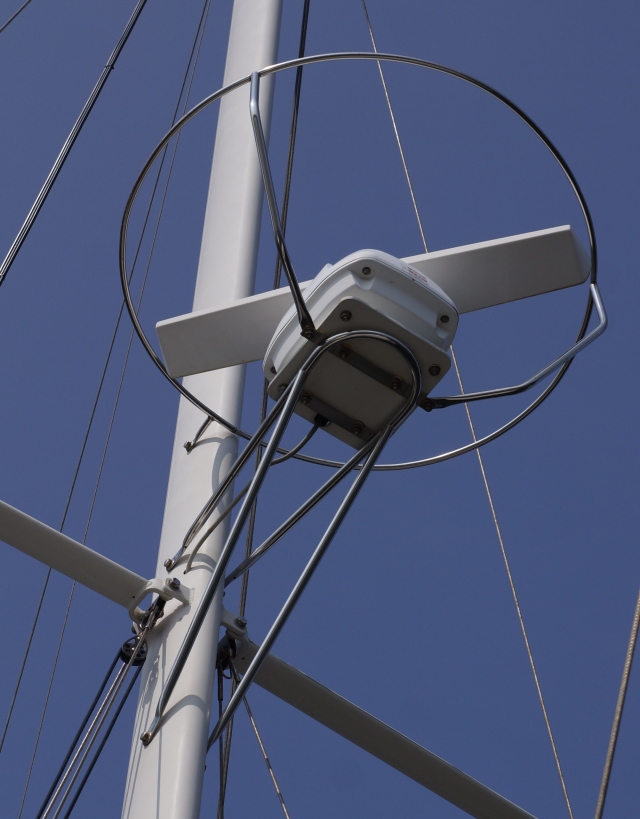 The aft bar holding the radar was brooken on both sides. Simple to fix, just weld it but first one has to loosen the radar from the bracket, hanging it to a halyard, dismantle the radar bracket, bring it to a weld shop and then mounting it again. If I had time I can do most of the job myself, but I do not fancy very much having the radar hanging in a halyard for more than a day or two.

Well I woke up one night and thought why not just tie it with a piece of Dyneema string?

My “Cooled welding” with Dyneema string, I tied down both bars even the one that was not broken, thrust it will last for a long time. And we can have bettter use for the 1000 $ there are always something new to mend, improve our just break down.

Well I’m not the only one working, Kerstin took care of the inside cleaning and treating with white vinegar to avoid mold. Cleaned out the anchor chain box etc. etc.

Now Kerpa is tied up with double mooring ropes and well fendered off. Remains from hurricanes can reach this area and then I know I have tied her up properly. Tomorrow we fly to Sweden